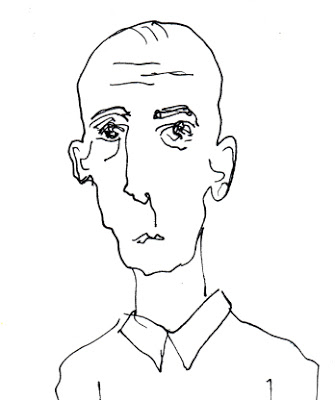 This drawing just blew my mind a little, I’ve been experimenting with psychic drawing and tonight I drew this image at the back of a full room of people. I put pen to paper having no idea of what would come out and then this little chap appeared, I felt his name was Robert and that he was a builder. I was also very drawn to a chap in the room who I thought this drawing was connected to… I approach the gentleman that I think this man is connected to at the end of the session, as he is leaving. I ask him if he can take the name Robert on the spirit side, he seems doubtful and says to me ‘not really’… Gah, thinking I am wrong on the name I show him my drawing instead, straight away he says ‘I know who that is! he only died a few months ago’, Wow I think… I carry on with the other bit of information that I have, I’m not sure if he was a builder I say. ‘He was’ he tells me, ‘we worked on quite a few jobs together’… Great! two out of three I think… But his name was not Robert I ask?, ‘it was’ he tells me… What!? I thought you said you didn’t know a Robert! ‘We all called him Bob but his name was Robert’… and he looked like that? I ask in disbelief… ‘Yes!’ he replies, ‘I’ve been thinking about him a bit recently, he died 5 months ago’, oh… well he just wanted to say a little hello to you I say. Thank you he says to me, clearly slightly taken aback himself. I’m not quite sure what to make of this experience… making me question lots!